5 Unusual Wedding Traditions in the World 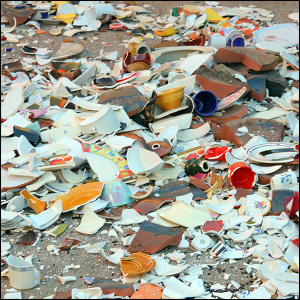 Most weddings in the United States are pretty predictable affairs, with a few traditions that seem to crop up at almost every ceremony. There’s the unity candle, the exchange of rings, the recitation of vows, perhaps a reading from Corinthians 13, and then the couple exchange their first kiss. There are some truly unique (and some quite unpleasant) wedding traditions around the world, however, that go a little stranger than just lighting a candle together. Which of these wild traditions will you add to your wedding day?

To celebrate the wedding, drive away evil spirits end assure a harmonious marriage, guests to some German weddings bring the couple new dishes as a wedding gift. But the crockery and cookware isn’t to fit out the new couple’s kitchen: the dishes are smashed, beaten, and stomped to bits. The sound is supposed to drive away evil spirits, and perhaps it serves to get any dish-smashing violence out of the new couple’s system before they begin their life together.

Most wedding-goers are familiar with the tradition of clinking glassware at the reception to compel the new couple to kiss. But in some parts of Sweden, the wedding couple doesn’t get to have all the fun. Whenever the bride or groom leaves the table, the one left seated gets rushed and kissed until his or her spouse returns. It’s a tradition that could lead to a lively reception, but potentially a very short marriage.

In the U.S., the bride is treated like a queen in the lead-up to her wedding day. Her every need is catered to, and her bridal party takes great pains to shield her from any additional stress before and during the ceremony.  Not so in Scotland, where the tradition of “blackening the bride” is supposed to toughen up the bride against possible adversity in married life. The bride is doused with all manner of disgusting stuff: tar, spoiled milk, rotten fish, mud, and flour. What could married life offer that could be worse?

In China, the groom doesn’t dump gross-smelling stuff on his bride; he just picks up a bow and shoots her with three arrows (the arrows don’t have heads, so they at most leave a bruise rather than a mortal wound). He then breaks the arrows as a symbol of his eternal love for his new bride. There’s no word on why he couldn’t just break the arrows without shooting them first.

Among the Masai tribe in Kenya, it’s not the groom visiting indignities on the bride: it’s the bride’s father. He “blesses” his daughter’s new marriage by spitting on her head and her breasts. She then must leave the village with her new husband without looking back, lest she be turned to stone.

Women in India who are born under certain unfortunate astrological conditions are called “Mangliks.” Legend has it that the first person a Manglik marries will die an early death. To get around the curse, Mangliks will have a wedding ceremony in which they marry an inanimate object, most commonly a tree. The tree takes on the Manglik curse, freeing the woman to marry her groom without sending him to the cemetery.

After the wedding in Indonesia, it is traditional for the couple to go three days and nights without–well, to put it delicately, without moving their bowels. The couple is supervised by friends and family to make sure they don’t break the rule and only allowed a little bit of food and water to make sure things stay where they are. The ordeal is supposed to lead to a happy marriage full of healthy babies, but we’re willing to bet you’ll take your chances without three days of constipation.