Being a Great Groomsman 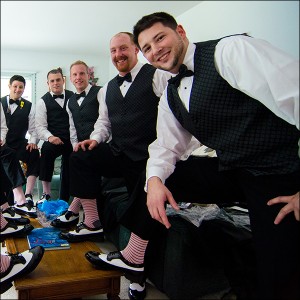 Though knowing the duties of a groomsman are a rite of passage in many circles, there are those out there that have no idea what it truly entails. Believe it or not, there are men who have never even attended a wedding, let alone suited up to be a part of one. While it may seem obvious to many of us what a groomsman’s duties are, there may be more to the job than you expect. Here is a brief overview of what it takes to be a great groomsman and what to expect if you accept the job as part of a friend or family member’s wedding.

First off, the good news, guys, is that you won’t have nearly the amount of responsibilities as bridesmaids have for the wedding. Depending on how the wedding is setup, some groomsman simply need put on your tuxedo, wear it proudly, and show up on time for the wedding. If that is what is expected of you at the wedding, that’s great; but traditionally there is a little more to the job of being a groomsman than that.

The first thing that you’ll need to do to be a groomsman is to either purchase or rent a tuxedo. This can’t just be any tuxedo, it must match the style and color scheme that was picked out in advance by the couple. Some couples allow their groomsmen and bridesmaids a little flexibility in their choices, others do not; it’s really up to them. However, it is your duty to choose your tuxedo, pay for the purchase or rental, and pick it up in time to be ready for the wedding.

Traditionally, the last party night that a man about to be married has is called their bachelor party. I think we’re all familiar with the term, and I’ll leave it up to your discretion of what you want to do on your bachelor party night, but the bottom line is that it is the responsibility of the groomsmen to plan and execute it in its entirety. Usually, the best man will take the lead role and the other groomsmen will add valuable ideas and funding, but every situation is different.

Being the best men brings along a whole slew of other responsibilities. Most importantly, you’ll be expected to give a speech at the reception dinner to toast the new couple. On top of that honor and duty, you’ll be expected to coordinate the other groomsmen, plan the majority of the bachelor party, and stand up next to the groom during the ceremony. Ultimately, being best man means that you are in charge of all the men on the groom’s side and being the groom’s “right hand man”.

Though you’re already spending a lot of money to participate in the wedding, you are still supposed to give the couple a wedding gift. It doesn’t need to be extravagant, but you should give them something nice since they obviously think highly enough of you to invite you to be in the wedding.

As a groomsman, you’ll need to make room in your schedule for all sorts of functions leading up to the wedding. These functions include the rehearsal dinner, bachelor party, and anything else you are asked to do by the couple. Being a great groomsman isn’t a free ride, there are many responsibilities and obligations that come along with the territory.

As part of your duties during the ceremony, you are often asked to help usher or escort people to their seats. This is particularly true for elderly guests or close family members because it makes them feel more appreciated and connected to the wedding when they are sat by someone who will be in the ceremony.