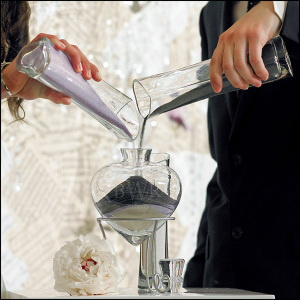 Almost every part of a wedding ceremony and reception is based on traditions or rituals that date back several decades; and sometimes even centuries. Everything from the bride wearing a vale to the groom wearing his boutonniere on his lapel is steeped in old tradition, so nearly everything you know and love about a wedding is like a living homage to generations that have passed. However, some traditions and rituals seen at a wedding are much more obvious to discern from otherwise random trinkets and practices, and most of these happen during the ceremony. If you’re interested in adding a wedding ceremony tradition or ritual to your special day but don’t know quite where to start, here’s a list of a few popular choices from a variety of cultures that you could easily borrow for your wedding.

This tradition is very popular in Christian wedding ceremonies, particularly Catholic. How it works is the bride’s parents light one candle while the groom’s parents light another candle, and then the bride and groom use these two candles to light one large candle that is theirs to share. By conducting this ritual, it is symbolic of the joining of two families where you can’t separate the two flames from each other ever again.

Similar to the unity candle ritual, a sand ceremony is when each person has a flask of sand that is different in color. Simultaneously, each person will pour their sand into a third, larger, flask so that the sand is combined in a completely random pattern. It is said that once the two flasks of sand are combined together, there is no way to separate them from each other; which is an obvious metaphor for marriage. This ritual is particularly popular for non-religious ceremonies and for couples that are “in tune” with Mother Earth.

This tradition dates back to early American history when it was illegal for two African-American slaves to get married. They would take a broom, decorate it with ribbons, and each person would jump over it to symbolize their commitment to the other person. Many couples choose to do this ritual still today as a way to honor their ancestors.

Handfasting is a very common practice where the hands of each person are bound together by a ribbon. This tradition dates back to England during the medieval times, but many couples still perform this either before or after they exchange their wedding rings. It’s not quite as dramatic these days, but nevertheless the tradition remains.

This popular tradition involves both the bride and groom giving a single rose to their mothers during the ceremony. It is supposed to be a sign of love, respect, and gratitude, and usually the rose is either white or red and each mother will carry it with her during the ceremony and reception.

When a partner from a couple is being married for a second time or more and has children from the previous marriage, the new stepparent will occasionally offer each child a small gift such as a medallion, necklace, or other piece of jewelry to symbolize the joining of a new family unit.